I’ve been using Traps Direct Spider Traps since the original release. In the last several months they started supplying the Next Generation Smart Spider Trap. One of the features was the new Ultra Light Catch Trap Surface. It seems that most spider and insect traps use the same glue as a mouse / rat trap, which requires a fair amount of weight to trap the target pest. The Ultra Light Catch was developed with the claim to catch a spider by a single leg. I remembered reading this on the TrapsDirect.com website.

Ok, so a few days ago I was in my kitchen and saw a Brown Recluse Spider walking across the puppy pad in my kitchen ( I have a diabetic Miniature Pincher who can’t always make it outside in time ). For some reason the puppy pads seem to be bug magnets.
So I decided to see if I could trap the spider by steering it into the trap.  Now the problem with this was getting a brown recluse spider bite if the trap didn’t grab the spider.

With a trap in each hand, I set a trap in front of the spider, and then waved the other behind him.  As you can see from the picture, with in the first steps the game was over.  Ultra Light Catch glue really did work..

One less Brown Recluse Spider to terrorize the home. 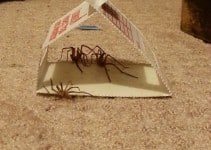 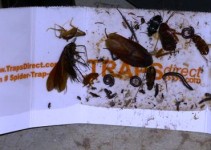 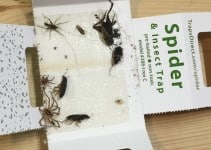